google6e3b22bfebd1edcb.html
Ricardo Mallarino
1. Mammalian skin patterning
​Our lab has a strong interest in exploring questions relating to patterning and the evolution of novelty in the mammalian skin. The mammalian skin is a powerful model because it exhibits remarkable diversity in structure and function across species, is experimentally accessible/tractable, and the molecular mechanisms underlying its formation are well characterized. We use a variety of approaches, including experimental embryology, transcriptomic and epigenomic profiling, comparative genomics, functional genetics, and imaging, to uncover gene function and understand mechanisms of evolutionary change. 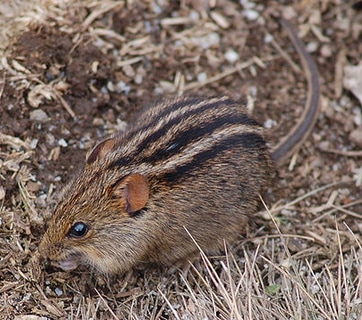 Stripe patterns
Many rodent species have evolved periodic pigmentation patterns (i.e., stripes and spots), which result from underlying differences in hair color. Periodic patterns in rodents are extremely stereotyped, suggesting a very tight genetic regulation of the temporal and spatial cues underlying their formation. How do skin cells receive, interpret, and execute the relevant information to generate such patterns? How are these mechanisms modified to produce pattern diversity? We are using pigment pattern formation in African striped mice (Rhabdomys pumilio) and other striped rodents as models to understand how the skin acquires positional information and how this information is modified to generate variation.

- Molecular mechanisms of pigment pattern specification
In addition to the direct regulation of pattern implementation genes, we want to uncover the positional signals and upstream cues that establish the pattern itself early in development. We use RNA-sequencing and forward-genetic screens coupled to skin grafts/explant cultures to dissect the detailed temporal and spatial molecular events leading to pigment pattern formation.

- Comparative genomics and evolution of pigment patterns
Periodic patterns have evolved in members of at least five different rodent families, with the majority of the diversity concentrated in the Muridae (mice) and the Sciuridae (squirrels). Interestingly, there are several instances in which the same pattern evolved independently in different species. We take a comparative genomics approach to uncover features unique to species with periodic patterns, determine whether the specific organization (i.e., sequence and/or number) of striped phenotypes is constrained by developmental and/or phylogenetic processes, and establish whether the same loci have been repeatedly used by different groups to generate similar outcomes.
2. Marsupial innate immunity
Marsupials  have short pregnancies and give birth to highly undeveloped young that often reside inside a pouch, where they complete their physical development. One of the consequences of this short gestation period is that, in contrast to placentals, neonates lack developed mature lymphocytes and immune tissues, which makes them incapable of mounting an adaptive immune response. This presents a significant challenge because the maternal pouch is in contact with the environment and is known to harbor a wide range of bacterial species, including several pathogenic ones. We are using a variety of approaches and focusing on the sugar glider (Petaurus breviceps), a species for which we have developed a range of molecular resources, to dissect marsupial immunity and understand the complex interactions between maternal tissue, neonates, and microbiome. This project is being done in collaboration with the Donia lab
3. Social behavior in African Striped mice
African striped mice are social, diurnal rodents that display a number of fascinating behaviors. We are using a variety of multidisciplinary approaches, including mapping of brain activity, transcriptomic/epigenomic profiling of brain regions, and modulation of neuronal activity, to dissect the molecular basis of social behaviors in this species. This project is being done in collaboration with the Peña lab.